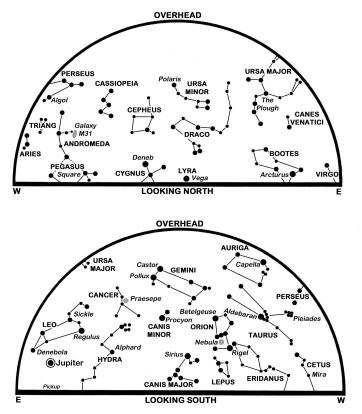 February brings our best evening skies of the year and, with this being a leap year, we have one extra day to enjoy them. Pride of place must go to Orion which marches across our southern sky from the south-east at nightfall tonight to stand in the south-south-west by our star map times.

We are all familiar with the Summer Triangle of bright stars (Vega, Deneb and Altair) which graces our summer nights, but less well known is the Winter Triangle that follows close behind Orion. Consisting of the stars Betelgeuse at Orion’s shoulder, Procyon in Canis Minor which stands level with Betelgeuse to its left, and Sirius in Canis Major, the Winter Triangle is brighter than its summer counterpart and much more isosceles in form.

Sirius, found by extending Orion’s belt down and to the left, is the brightest star in our night sky largely because it is one of the closest to us at 8.6 light years. Indeed, viewed from the same distance as Betelgeuse, some 500 light years, it would be too dim to see without binoculars.

Because they are so obviously placed in the sky in the shape of a man, it is easy to regard the main stars of Orion as lying at similar distances from us. Although they are all highly luminous and far away, they stand at very different distances so that Orion’s impressive outline would change beyond recognition if we could view it from a different direction. A striking example concerns the three stars of Orion’s belt which, in order from the left, are Alnitak, Alnilam and (slightly fainter) Mintaka. Alnitak and Mintaka are thought to stand around 700 light years from us, but some estimates put Alnilam as distant as 2,000 light years, more than twice as far.

The Sun climbs almost 10° northwards during February as sunrise/sunset times for Edinburgh change from 08:08/16:45 on the 1st to 07:06/17:46 on the 29th. The Moon is at last quarter on the 1st, new on the 8th, at first quarter on the 15th and full on the 22nd. Because its path is inclined steeply in the south-west at nightfall, there is an excellent opportunity to spot the very young and brightly earthlit Moon low in the west-south-west on the evening of the 9th. It should still be spectacular over the following few evenings.

No bright planets are visible until the conspicuous Jupiter begins its climb through our eastern and south-eastern sky as Orion crosses the meridian. It lies in south-eastern Leo, 22° below and left of Regulus, and is creeping westwards against the stars as it draws towards its opposition in March. This month it brightens from magnitude -2.4 to -2.5, approaches from 694 million to 665 million km and swells from 42 to 44 arcseconds in diameter.

Any telescope should show Jupiter’s two main dark cloud belts, appearing symmetrically and in parallel on either side of its pale equatorial zone. Spots and streaks in the clouds, including the famous Red Spot in its southern hemisphere, drift from east to west across the Jovian disk as the planet rotates in just under ten hours. Of course, we need only binoculars to spot Jupiter’s four main moons as they change their relative positions on either side of the disk.

The second bright planet of the night stands low in the south-east as Jupiter reaches the meridian some five hours after our map times. The reddish, or perhaps salmon-pink, Mars lies below the Moon and just above the double star Zubenelgenubi in Libra on the morning of the 1st.

Mars spends February sliding eastwards though Libra and brightening from magnitude 0.8 to 0.3 as it approaches from 205 million to 161 million km. Its small slightly-gibbous disk grows from 7 to 9 arcseconds and is starting to reveal detail through good telescopes, particularly if we catch it just before dawn as it passes less than 20° high in the south.

If we look before dawn and take a line from Jupiter, well over in the west-south-west, to Mars in the south and onwards to the left we reach the almost equally-bright Saturn (magnitude 0.6 to 0.5) which is slow-moving in southern Ophiuchus, 8° above-left of the red supergiant star Antares in Scorpius. The Moon stands above Antares and above-right of Saturn on the morning of the 3rd when Saturn’s disk appears 16 arcseconds wide, with its rings spanning 36 arcseconds and tipped 26° to our view – a stunning sight.

The line-up of Jupiter, Mars and Saturn may be extended to Venus and Mercury, hugging our south-eastern horizon, and has led to widespread claims of a spectacular planetary alignment in our morning sky. In fact, the term “planetary alignment” is more usually applied to those occasions when several planets collect together in the same region of sky. There was one such tight alignment of Venus, Mars and Jupiter before dawn in October and similar events have been preceded by apocalyptic pronouncements in the crackpot community.

The current alignment stretches over more than 100° of sky and is better appreciated by observers further south and particularly by those in the southern hemisphere. For Scotland, though, Venus is uncomfortably low in our bright predawn twilight and although it is brilliant at magnitude -4.0 it is sinking ever lower – its altitude at Edinburgh’s sunrise being 7° on the 1st and half that by the month’s end. Mercury, much fainter near magnitude 0.0 and farthest from the Sun on the 7th, is a few degrees to the lower-left of Venus and very difficult from our latitudes. Both stand below the slender waning Moon on the 6th.

This is a copy of Alan’s article to be published in The Scotsman on February 1st 2016, with thanks to the newspaper for permission to reproduce here. 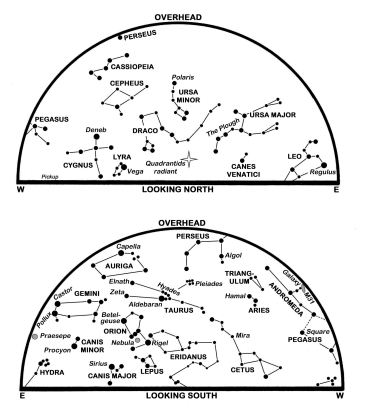 If one of our resolutions for the New Year is to get to grips with the sky at night, then we could hardly do better than start with our January evenings. The unmistakable constellation of Orion the Hunter rises in the east at nightfall and is the centrepiece of a star-strewn region in the south-south-east by our star map times. On the other hand, most of the brighter planets, and what may be our brightest comet of 2016, are best seen in the morning sky.

Just as last month brought the Geminids as the best meteor shower of 2015, so the imminent Quadrantids shower may provide our best display of 2016. Lasting from today until the 6th, but with most of its activity in the hours before dawn on the 4th, its medium speed meteors are seen in all parts of the sky but diverge from a radiant point below and left of the Plough’s handle. The Plough itself lies in the north at nightfall and climbs through the north-east and east to lie overhead before dawn.

Most of the constellation figures show little relation to the things, persons or animals they represent. Orion is a striking exception, for he has conspicuous stars at his shoulders and knees and an iconic line of three stars to define the belt around his waist. Admittedly, his head is marked only by a knot of fainter stars, although if we look carefully we can find an arc of other faint stars to represent the shield he holds in the face of the charging bull, Taurus. Another line hangs below his belt to form his sword.

Use binoculars or a telescope to inspect the sword and it is easy to spot the Orion Nebula, a cloud of gas and dust that lies some 1,350 light years away. This miasma of greens, reds and blues is a region where new stars are forming, together with their nascent planetary systems.

The line of Orion’s belt slants downwards to the brightest star Sirius in Canis Major, the larger of Orion’s two dogs. Extend the line the other way and we reach Taurus with its leading star Aldebaran in and the Pleiades star cluster. As Orion sinks towards our western horizon early on the morning of the 20th, Aldebaran is once again occulted by the Moon. As seen from Edinburgh, the star disappears behind the upper edge of the Moon just before 03:24.

Jupiter rises at Edinburgh’s eastern horizon at 22:39 tonight and two hours earlier by the 31st. Now in south-eastern Leo and already twice as bright as Sirius, it brightens from magnitude -2.2 to -2.4 this month and reaches a so-called stationary point on the 8th when its easterly motion reverses to westerly. If you did get a telescope for Christmas, then enjoy the view of its fascinating cloud-banded disk which swells in diameter from 39 to 42 arcseconds. Jupiter stood near the Moon last night and the two are even closer on the 28th-29th.

Mars rises in the east-south-east by 02:15 and lies to the left of Spica in Virgo as they pass 25° high in the S before dawn tomorrow. The Moon is nearby on Sunday and even closer on 1 February, by which time Mars has travelled east-south-eastwards into Libra where it lies just above the double star Zubenelgenubi. Mars improves from magnitude 1.3 to 0.8 to overtake Spica in brightness, but is shows only a small 6 arcseconds disk through a telescope.

Venus continues as a brilliant morning star (magnitude -4.1 to -4.0) though its altitude in the south-east at sunrise sinks from 15° today to 8° by the 31st. It lies to the right of the waning Moon on the 7th when a telescope shows its disk to be 79% sunlit and 14 arcseconds wide. Venus is just 2° to the right of Saturn on that morning and within 7 arcminutes of Saturn on the 9th. At magnitude 0.5, Saturn is much the fainter of the two as it creeps eastwards in southern Ophiuchus.

Mercury has a few more days as a difficult evening star. It is bright at magnitude -0.2 tonight, but it hugs our south-western horizon at nightfall and sets less than 100 minutes after the Sun. As the month ends it is back in our morning twilight, a few degrees to the left of Venus.

Comet 2013 US10 Catalina has remained stubbornly below naked eye brightness in our morning sky, though photographs reveal a striking divergence between its tails of dust and ionized gas, the latter being torn and billowed by the solar wind.

Following perihelion 123 million km from the Sun in mid-November, the comet is closest to Earth (108 million km) on the 17th. Likely to appear as a small greenish fuzzy blob through binoculars, it moves from less than 0.5° west of the conspicuous star Arcturus in Bootes this morning to lie 1.2° east of Alkaid, the star at the end of the Plough’s handle, before dawn on the 15th. It is currently around the sixth magnitude but may be a magnitude dimmer by the month’s end as it sweeps within 9° of Polaris and recedes on a trajectory that will never bring it back towards the Sun.

This is a slightly-revised version of Alan’s article published in The Scotsman on January 2nd 2016, with thanks to the newspaper for permission to republish here.  Journal Editor’s apologies for the lateness of the article appearing here.