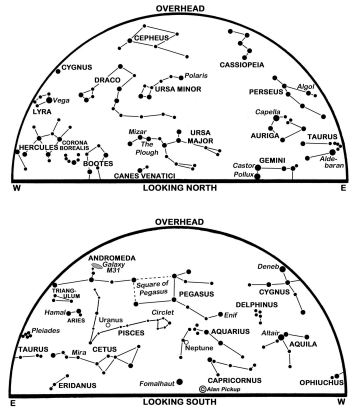 As we plunge into the final quarter of the year, our lengthening nights offer a procession of stellar views that stretch from the Summer Triangle in the evening to the stunning star-scapes around Orion during the morning hours. The brighter planets, though, are on show only low down around dusk and dawn.

The middle of the Summer Triangle stands some 60° high and due south as darkness falls tonight. Its brightest corner star, Vega in the constellation Lyra, lies just south-west of overhead, while Deneb in Cygnus is even higher in the south-east and Altair in Aquila lies below them on the meridian.

With no hindering moonlight over the next few evenings, now is a good time to spy the Milky Way as it arches almost overhead after dusk, climbing from Sagittarius on the south-south-western horizon and flowing through the heart of the Triangle on its way to Deneb and the “W” of Cassiopeia high in the north-east. Of course, unless we can find a dark site, away from the pollution of street lighting and the like, we may have trouble seeing the Milky Way or indeed any but the brighter stars on our chart.

Venus stands nearly 5° high in the south-west at sunset and sets itself only 43 minutes later on the 1st. By the 31st it is barely a degree higher in the south-south-west at sunset but remains visible for 73 minutes so is easier to spot if we enjoy an unobscured outlook. It blazes at magnitude -3.9 and stands 4° below-right of the slender earthlit Moon on the 3rd when its gibbous disk appears 12 arcseconds wide and 85% sunlit if viewed telescopically.

In the month that the first European-Russian ExoMars spacecraft reaches Mars, the planet is the brightest object low in the south-south-west as the twilight disappears. ExoMars consists of a Trace Gas Orbiter to study rare gases, and particularly methane, in Mars’ atmosphere and it also has the experimental Schiaparelli lander.

Mars fades slightly from magnitude 0.1 (almost equal to Vega) to 0.4 this month as it tracks 21° eastwards above the so-called Teapot of Sagittarius, clipping the top star of the Teapot’s lid (Kaus Borealis) on the 7th. The planet recedes from 160 million to 187 million km during October while its gibbous disk shrinks to 7.5 arcseconds in diameter which, with its low altitude, makes telescopic study all the more challenging. It lies below the Moon on the 8th.

A little fainter than Mars, and a little lower to Mars’ right in this evening’s sky, is the ringed planet Saturn. This shines at magnitude 0.6 in southern Ophiuchus and appears 16 arcseconds across, with its glorious rings spanning 36 arcseconds. Saturn lies to the left of the earthlit Moon on the 5th and dips lower with each evening until it is passed by Venus late in the month – catch Saturn 3° above Venus on the 29th.

By our map times, both Saturn and Mars have set and the Summer Triangle has toppled over into the west. High in the south is the Square of Pegasus, a line along its right-hand side pointing down to the southern bright star Fomalhaut in Piscis Austrinus the Southern Fish. Just to the right of this line, and 2° south-west (below-right) of the star Lambda Aquarii (magnitude 3.7), is the farthest of the Sun’s planets, Neptune. At magnitude 7.8 and a distance of 4,350 million km on the 1st, we need binoculars and a better chart to identify it, and probably a large telescope to glimpse its bluish disk only 2.3 arcseconds wide.

To the east of Aquarius lies the constellation of the two fish, Pisces, and the second most distant planet, Uranus, which stands directly opposite the Sun at opposition on the 15th at a distance of 2,835 million km. At magnitude 5.7 it is near the limit of naked-eye visibility under the darkest of skies, but is an easier binocular or telescope target with its diameter of 3.7 arcseconds.

Orion rises in the east less than two hours after our map times and strides across the meridian before dawn. To its north and east lies Gemini and between the two is the radiant point for the annual Orionids meteor shower. This is visible during our morning hours throughout the second half of the month and peaks at rates around 25 meteors per hour between the 21st and 24th. Its meteors are swift, with many leaving glowing trains in their wake, and represent the dusty debris laid down by Halley’s Comet.

The night ends with Mercury which is conspicuous at magnitude -0.7 and rises in the east 109 minutes before the Sun on the 1st, climbing to stand 9° high forty minutes before sunrise. By the 11th, as its favourable morning show draws to a close, it rises 76 minutes before sunrise. On that morning, the even brighter Jupiter lies only 0.7° below-right of Mercury as the giant planet climbs away from the Sun’s far side. By the 28th, Jupiter rises at about 05:40 BST and is an impressive sight 1.5° below the earthlit waning Moon.

This is a slightly-revised version of Alan’s article published in The Scotsman on October 1st 2016, with thanks to the newspaper for permission to republish here.  Journal Editor’s apologies for the lateness of the article appearing here.