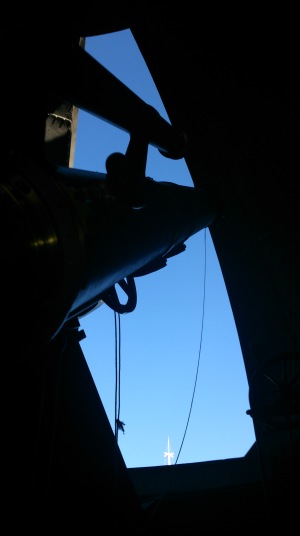 A view through the aperture of the dome with the Cooke Telescope silhouetted.

I visited the City Observatory on Calton Hill on the 1st of July 2014. The Open Gallery and Edinburgh City Council had opened the site during the course of the day for stakeholders, in order to provide an update on the development of the observatory. It proved to be an excellent evening! It was rather like the old Doors Open days but, instead of concentrating on the past, this was looking to the future with great optimism. I met Kate Gray, Director of The Collective Gallery who run the site, and she said that they have secured the majority of the required funding for the next stage of the development. This will hopefully mean that there should be access to the dome and telescope by 2017.

I was pleased that the condition of the building hadn’t deteriorated as much as I had feared and it was a walk down memory lane as I looked round the Playfair building. I met David Williams and Frank Little from the City Council and was given the go-ahead to open up the dome! The door opened easily, after the usual climb to unlock the padlock, and the dome rotated quite smoothly. The Cooke telescope seems to be in perfectly good condition and I was able to unlock and move it.

Ken Thomas, President of the ASE, with the Cooke Telescope.

There were a good number of visitors and they were fascinated with the telescope and the dome.  All in all, it was a great night and, hopefully, just the start of a long and fruitful collaboration with the Collective Gallery and the City.

Ken is the Society’s current President and also leads the Imaging Group.  He has, along with the rest of the ASE Council, endevoured to maintain good links with Edinburgh City Council in the hope that eventually the Society will once again be able to hold observing sessions at the City Observatory.