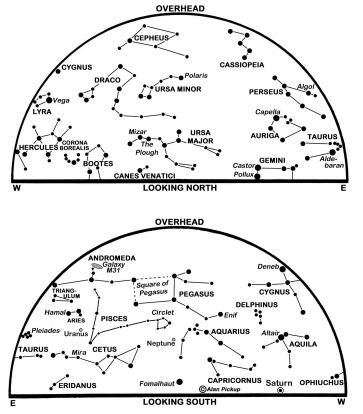 It is two years since astronomers in Hawaii discovered the first object known to have approached the Sun from beyond our solar system. Given the Hawaiian name of ʻOumuamua, this appeared to be a reddish and elongated slab-shaped body of about the size of a skyscraper that passed 38 million km from the Sun before sweeping within 24 million km of the Earth. It came from roughly the current direction of the star Vega and headed away towards the Square of Pegasus, though it may take 20,000 years to leave the solar system completely.

Its small size meant that it was followed only faintly and for barely a month. Astronomers were surprised to notice no sign of cometary activity – no surrounding fuzzy coma and no tail – while suggestions that it was an alien probe prompted unsuccessful scans for any artificial radio emissions.

Now the second-known interstellar intruder has been sighted, and this one appears larger, brighter and is surely a comet. It was discovered photographically on 29 August from an observatory in Crimea by the amateur astronomer Gennady Borisov using a telescope he built himself. Initially called C/2019 Q4 (Borisov), or Comet Borisov for short, it was clearly speeding along a strongly hyperbolic path past the Sun, very unlike the elliptical or nearly parabolic orbits followed by all previous comets. Now it has been awarded the official interstellar designation of 2I/Borisov.

The comet was travelling at about 33 km per second as it entered the solar system from the direction of the constellation Cassiopeia, fast enough to cover the 4-light-years distance of the nearest star in under 40,000 years. Perihelion, its closest point to the Sun, occurs at 303 million km on 8 December, putting it still beyond the orbit of Mars, and it reaches its closest to the Earth at 293 million km twenty days later.

It is still faint, no better than magnitude 17, but may attain magnitude 14 near perihelion and, while it will never reach naked-eye or binocular visibility, is likely to be within telescopic range until at least the middle of next year. This gives plenty of time for astronomers to study a comet that probably formed elsewhere in the Milky Way galaxy at a different time and with possibly a different composition than those that formed alongside the Sun and Earth. October has Comet Borisov travelling south-eastwards to the west of the Sickle of Leo and passing within a Moon’s-breadth east of the star Regulus on the 24th.

Leo’s Sickle rises in the north-east in the early morning and stands some 30° high in the east before dawn as our southern sky is dominated by the glorious constellation of Orion. The pre-dawn also gives us a chance to spot Mars as it emerges from the Sun’s far side. The planet rises in the east one hour before the Sun on the 1st and two hours before sunrise on the 31st. Moving east-south-eastwards in Virgo, it shines only at magnitude 1.8 and lies 8° below the slender earthlit Moon on the 26th.

As the Sun tracks southwards by 11° during October, the sky at nightfall is changing only slowly. The Summer Triangle is still high in the south as darkness falls, although its three stars, Vega in Lyra, Deneb in Cygnus and Altair in Aquila, have shifted into the west by our star map times. By then, Pegasus, the upside-down flying horse with his nose near Delphinus the Dolphin, stands high in the south.

Like Mars, Venus is also coming into view from beyond the Sun, but this time into our evening twilight in the west-south-west. Although brilliant at magnitude -3.9, it stands a mere 3° high at sunset for Edinburgh and sets at present only 30 minutes later, so we need good weather and a clear horizon to catch it. On the 29th, look for it 2.8° below the sliver of the earthlit young Moon, only 3° illuminated. Mercury is fainter and even lower at sunset and not visible from Scotland.

Jupiter is well past its best as an evening object although it remains obvious low in the south-west at nightfall, sinking to set at Edinburgh’s south-western horizon at 21:14 BST on the 1st and as early as 18:34 GMT by the 31st. At magnitude -2.0 to -1.9 and 36 to 33 arcseconds in diameter, it lies close to the Moon on the 3rd and 31st.

Saturn, one tenth as bright at magnitude 0.5 to 0.6, lies some 25° to the left of Jupiter. When it is close to the first quarter Moon on the 5th, its disk and rings span 17 and 38 arcseconds respectively. It is in Sagittarius low in the south at nightfall and sets in the south-west soon after our map times.

Neptune and Uranus are binocular brightness object of magnitudes 7.8 and 5.7 in Aquarius and Pisces respectively. There is little hope of locating them using our chart, but a web search, such as “Where is Uranus?”, should bring up information and a finder chart. Uranus, in fact, reaches opposition at a distance of 2,817 million km on the 28th when it stands directly opposite the Sun and appears as a tiny 3.7 arcseconds blue-green disk through a telescope.

Our Diary, below, records the peak dates for two of the October’s meteor showers, the Draconids on the 8th and the Orionids on the 22nd. Neither is among the year’s top showers, though both can yield rates of 20 or more meteors per hour under ideal conditions. The Draconids are active from the 6th to the 10th with slow meteors that diverge from a radiant near the Head of Draco, the quadrilateral of stars below and left of the D of DRACO on our north map. Unfortunately, the light of the bright gibbous Moon will hinder observations before the Moon sets in the early morning.

The Orionids, like May’s Eta Aquarids shower, are caused by meteoroid debris from Comet Halley. They last throughout the month and into early November but are expected to be most prolific on the nights of the 22nd and 23rd when their fast meteors diverge from a point that lies around 10° north-east (above-right) of Betelgeuse at Orion’s shoulder. That point passes high in the south before dawn but is just rising in the east-north-east at our map times, so no Orionids appear before then. As with those other swift meteors, the Perseids of August, many of the brighter Orionids leave glowing trains in their wake.

Times are BST until the 27th and GMT thereafter.

This is an extended version, with added diary, of Alan’s article published in The Scotsman on September 30th 2019, with thanks to the newspaper for permission to republish here.