Saturn at its best as summer begins 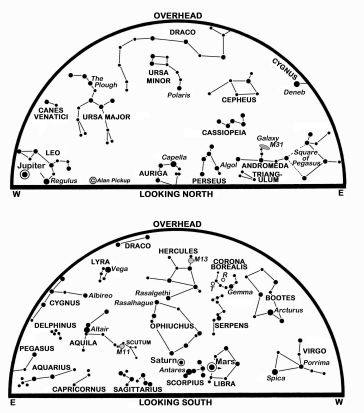 The Sun reaches its most northerly place in the sky at the summer solstice on the 20th, regarded by many as the start of summer in our northern hemisphere. Contradictorily, though, the days around then are also classed as midsummer though the actual days of any midsummer celebrations vary from country to country. More sensibly, in my view, the Met Office defines summer to span the months of June to August which would place the middle of summer in mid-July and, consequently, means that summer begins on June 1.

One is the beautiful ringed world Saturn which stands opposite the Sun in the sky on June 3, only twelve days after Mars’ closest opposition since 2005. Both planets shine brightly in the south at our star map times as they track westwards across the sky. Unfortunately, Saturn climbs less than 14° above Edinburgh’s horizon and Mars is a degree or so lower still so telescopic views are hindered by their low altitudes.

Having stood at its closest (75 million km) on May 30, Mars fades from magnitude -2.0 to -1.5 as it recedes to 86 million km while telescopes show it contracting from almost 19 to 16 arcseconds in diameter, still large enough to show some detail on the disk. It tracks 5° westwards into the heart of Libra this month, its motion slowing to a halt on the 30th before resuming as an easterly progress that will persist for the next two years.

Saturn’s disk is similar in size, 18 arcseconds at opposition, but its rings are 42 arcseconds wide and have their north face tipped 26° towards us. Not since 2003 have the rings been so wide open to inspection. It dims slightly, from magnitude 0.0 to 0.2 as it creeps westwards in southern Ophiuchus about 7° above-left of Antares in Scorpius.

Third but not least in our planetary line-up, Jupiter is prominent at magnitude -2.0 in the south-west as the sky darkens at present, but sinks lower with each day and sets in the west a little more than one hour after our map times. Now moving eastwards below the main figure of Leo, it passes within 0.1° south of the magnitude 4.6 double star Chi Leonis on the 10th and dims a shade to magnitude -1.9 by the 30th.

Of the other naked-eye planets, Mercury stands 24° west of the Sun on the 4th and, while well placed for observers south of the equator, is swamped in our predawn twilight. Venus reaches superior conjunction on the Sun’s far side on the 6th and is not visible either.

Our star charts show the stars of the Summer Triangle, Vega, Deneb and Altair, climbing in the east to south-east as the Plough stands high in the north-west. The curve of the Plough’s handle extends to the brightest star visible at our map times, Arcturus in Bootes. Look some 20° above and to the left of Arcturus for the pretty arc of stars that make up Corona Borealis, the Northern Crown, which, because it is incomplete, should perhaps be called the Northern Tiara.

Corona’s leading star has the dual names of Gemma, for an obvious reason, and Alphecca which derives from the Arabic for “the bright of the broken ring”. At magnitude 2.2, though, it was surpassed briefly and unexpectedly exactly 150 years ago, in 1866, by the appearance of a nova (“new star”) just beyond the crown’s south-eastern edge.

Now called T Coronae Borealis (or T CrB), this reached magnitude 2.0 but plunged below naked eye visibility after only eight days to became slightly variable in brightness as a telescopic object just fainter than the tenth magnitude. To much surprise it burst into prominence again in 1946 though this time it was already fading at magnitude 3.2 when it was first spotted.

T CrB thus earned its nickname as the Blaze Star and became the brightest known of ten such recurrent novae in the sky. Studies over the past year show it slightly brighter and bluer than usual and hint that a new outburst may occur at any time, so this is one to check regularly.

Another variable star, R CrB, is usually near the sixth magnitude and the brightest star within the crown. However, normally for a few weeks or months every few years, it fades to become a dim telescopic object when, so it is thought, clouds of soot form in its atmosphere and block its light. Strangely, it has yet to recover following a record-breaking fade in 2007 and was still near the 14th magnitude a few days ago.

Despite our summer twilight, Scotland is best placed to see noctilucent or “night-shining” clouds which may appear cirrus-like and often bluish low down between the north-west after sunset and the north-east before dawn. Formed by layers of ice-crystals near 82 km in height, these are Earth’s highest clouds and able to shine in the sunlight long after our normal clouds have dimmed to darkness.

This is a slightly-revised version of Alan’s article published in The Scotsman on June 1st 2016, with thanks to the newspaper for permission to republish here.