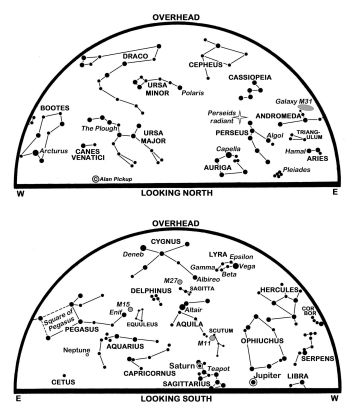 Recent weeks have seen the Earth pass between the Sun and its two largest planets, the gas giants Jupiter and Saturn. Now they hang low in our evening sky, with Jupiter brighter than any star but less than 12° high in the south-south-west at nightfall as it sinks to set in the south-west one hour after our star map times. Saturn, one tenth as bright, trails 30° behind Jupiter and crosses our meridian a few minutes before the map times.

With the exception of Mercury, these are our only naked eye planets. Both Venus and Mars are hidden on the Sun’s far side where Venus reaches its superior conjunction on the 14th. Mars stands at the far-point in its orbit of the Sun on the 26th and, by my reckoning, is further from the Earth on the 28th (400 million km) than it has been for 32 years.

The Summer Triangle of bright stars, Deneb, Vega and Altair, fills the high southern sky at our map times as the Plough stands in the north-west and “W” of Cassiopeia climbs high in the north-east. Below Cassiopeia is Perseus and the Perseids radiant, the point from which meteors of the annual Perseids shower appear to diverge as they disintegrate in the upper atmosphere at 59 km per second.

The meteoroids, debris from Comet Swift-Tuttle, encounter the Earth between about 17 July and 24 August but arrive in their greatest numbers around the shower’s maximum, expected at about 08:00 BST on the 13th. Sadly, the bright moonlight around that date means that we may see only a fraction of the 80-plus meteors that an observer might count under ideal moonless conditions. It is just as well that Perseids include a high proportion of bright meteors prone to leaving glowing trains in their wake. Our best night is likely to be the 12th-13th as the radiant climbs to stand around 70° high in the east as the morning twilight takes hold.

In a month that sees Jupiter dim slightly from magnitude -2.4 to -2.2 and its distance increase from 691 million to 756 million km, its westerly motion in southern Ophiuchus slows to a halt and reverses at a so-called stationary point on the 11th. Its cloud-banded disk, around 41 arcseconds wide, remains a fascinating telescopic sight, particularly given the recent disruption to its Great Red Spot.

Saturn recedes from 1,362 million to 1,409 million km and dims from magnitude 0.2 to 0.3 as it creeps westwards below the Teaspoon, a companion asterism to the Teapot of Sagittarius. Through a telescope, Saturn’s disk appears 18 arcseconds wide while the rings span 41 arcseconds and have their north face tipped at 25° towards the Earth.

Catch the Moon close to Jupiter on the 9th and to the left of Saturn as the Perseids peak on the 12th-13th.

Mercury stands between 2.5° and 5° high in the east-north-east one hour before Edinburgh’s sunrise from the 5th and 22nd. It becomes easier to spot later in this period as it brightens from magnitude 1.0 to -1.2, though we need a clear horizon and probably binoculars to spot it. It is furthest from the Sun, 19°, on the 10th.

The only constellation named for a musical instrument, Lyra the Lyre, stands high on the meridian as darkness falls. Its leading star, the white star Vega, is more than twice as massive as the Sun and 40 times more luminous, making it the second brightest star in our summer night sky (after Arcturus) at its distance of 25 light years (ly). Infrared studies show that Vega is surrounded by disks of dust, but whether this hints at planets coalescing or asteroids smashing together is a matter of controversy – perhaps a mixture of the two.

Some 162 ly away and three Moon-breadths above-left of Vega is the interesting multiple star Epsilon, the Double Double. Binoculars show two almost-equal stars, but telescopes reveal that each of these is itself double. One of the four has its own dim companion and the whole system is locked together gravitationally, though the orbital motions are so slow that little change in their relative positions is noticeable over a lifetime.

The more dynamic system, Beta Lyrae (see map), lies almost 1,000 ly away and has two main component stars that almost touch as they whip around each other in only 12.9 days. Tides distort both stars and, as they eclipse each other, Beta’s total brightness varies continuously between magnitudes of 3.2 and 4.4 – sometimes it can rival its neighbour Gamma while at others it can be less than half as bright.

At a distance of 2,570 ly and 40% of the way from Beta to Gamma is the dim Ring Nebula or M57. At magnitude 8.8 and appearing through a telescope like a small smoke ring around one arcminute across, it surrounds a much fainter white dwarf star which is what remains of a Sun-like star that puffed away its atmosphere towards the end of its life. The Dumbbell Nebula, M27, lies further to the southeast in Vulpecula, some 3° north of the arrowhead of Sagitta the Arrow. At 1,230 ly, its origin is identical to that of the Ring though it is larger and brighter and readily visible through binoculars.

This is a slightly revised version, with added diary, of Alan’s article published in The Scotsman on July 31st 2019, with thanks to the newspaper for permission to republish here.