Pole stars of the future in the Summer Triangle 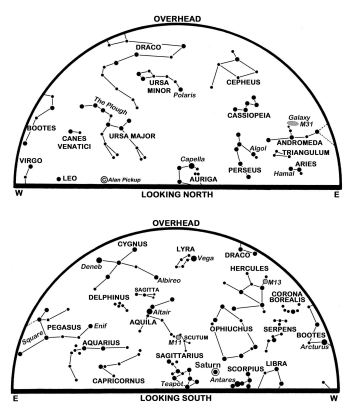 The Sun’s southerly motion since the solstice on 21 June has yet to gain speed and not until 12 July does it lie sufficiently far south for Edinburgh to enjoy any so-called nautical darkness, with the Sun more than 12° below the northern horizon in the middle of the night. Even then, moonlight is troublesome for a few more days to delay our first views of a dark summer night sky.

If there is one star-pattern that dominates our skies over the summer, it is the Summer Triangle. Formed by the bright stars Vega in the constellation Lyra, Deneb in Cygnus and Altair in Aquila, it occupies the upper part of our south star map, though its outline is not depicted. In fact, the projection used means that the Triangle’s proportions are squashed, because Vega and Deneb are significantly closer together in the sky than either are to Altair.

The leader and brightest of the Triangle’s stars is Vega which moves from high in the east at nightfall to stand even higher in the south at our map times. Blazing at magnitude 0.0 from a distance of 25 light years, it is a white star, twice as massive as our Sun but very much younger. Excess heat revealed by infrared astronomy indicates that Vega is encircled by a disk of dust which may be evidence that a planetary system is forming around it.

Set your time machine for about AD 13,700 and you will be able to glimpse Vega close to where we currently find Polaris, our current Pole Star. This is because the Earth’s axis is slowly toppling in space, taking 26,000 years to complete a 47° circle in the sky and carrying the axis to within 4° of Vega. Polaris happens to lie within 0.8° of the axis at present so that, as the Earth rotates once each day, it stays almost fixed in our sky and the other stars appear to circle counterclockwise around it

Altair is the second brightest of the Triangle’s stars and one of the closest bright stars at “only” 16.7 light years. Shining at magnitude 0.8, half as bright as Vega, it is 80% more massive than our Sun but, remarkably, spins on its axis in about nine hours as compared with the more leisurely 25 days taken by the Sun. As a result, it is noticeably oblate, measuring 20% wider across its equator than it does pole-to-pole.

Deneb’s magnitude of 1.2 makes it the dimmest of the Triangle’s corner stars but it is also one of the most luminous stars in our Milky Way Galaxy. Because its distance may be around 2,600 light years, it very difficult to measure the minuscule shift in its position when viewed from opposite sides of the Earth’s orbit around the Sun – the parallax technique that gives us accurate distances to Vega and Altair. Indeed, estimates of Deneb’s distance differ by well over 1,000 light years.

White-hot and shining at some 200,000 Sun-power, Deneb is large enough to engulf the Earth were it to swap places with the Sun. It is also burning its nuclear fuel at such a rate that it seems destined to disintegrate in a supernova within a few million years, although it should survive to be another of our future pole stars as it comes as close as 5° to the pole in AD 9,800.

At magnitude -2.0, Jupiter remains our brightest evening planet though it stands lower in the south-west to west as it sinks to set in the west just before our star map times. Above and to the right of the star Spica in Virgo, it lies to the right of the Moon in the south-west as the sky darkens on the 1st and is just below the Moon and much lower in the west-south-west on the 28th. The cloud-banded Jovian disk appear 39 arcseconds wide at mid-month if viewed telescopically, while binoculars allow glimpses of its four main moons.

Saturn is less conspicuous at magnitude 0.1 to 0.3 but continues as the brightest object low in our southern night sky. Creeping westwards against the stars of southern Ophiuchus, it crosses Edinburgh’s meridian at an altitude of 12° one hour before our map times and may be spotted 3° below-left of the Moon on the 6th. Binoculars show it as more than a round dot, while small telescopes reveal the beauty of ring system which is tilted wide open to our view and spans 41 arcseconds in mid-July.

Venus is brilliant at magnitude -4.1 in the east before dawn. After rising in the north-east at about 02:15 BST throughout the month. it climbs to stand 17° high at sunrise as the month begins and higher still by its end. Seen through a telescope, it is 16 arcseconds across and 70% illuminated when it lies to the left of waning (15% sunlit) and earthlit Moon on the 20th. Against the background stars of Taurus, the planet moves from 8° below-right of the Pleiades tomorrow to pass 3° above-left of Aldebaran on the 14th.

Of the other bright planets, Mars is out of sight as it reaches conjunction on the Sun’s far side on the 27th, while Mercury stands furthest east of the Sun (27°) on the 30th but is unlikely to be seen near our west-north-western horizon in the bright evening twilight.

This is a slightly-revised version of Alan’s article published in The Scotsman on June 30th 2017, with thanks to the newspaper for permission to republish here.