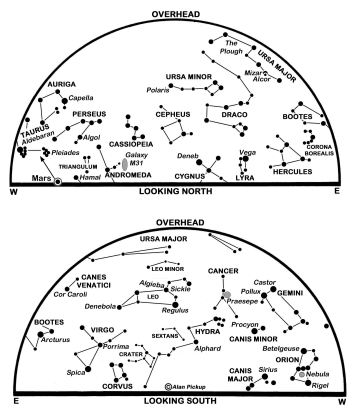 The Sun climbs northwards at its fastest for the year in March and crosses the sky’s equator at 21:58 on the 20th, the time of our vernal or spring equinox. As the days lengthen rapidly, the stars in the evening sky appear to drift sharply westwards so that Orion, which is astride the meridian as the night begins on the 1st, stands 45° over in the south-west by nightfall on the 31st.

Another consequence of the Sun’s motion is that the Earth’s shadow, on the night side of the planet, is tilting increasingly southwards so that it no longer reaches so far above Scotland at midnight. Indeed, by the end of March the shadow is shallow enough that satellites passing a few hundred kilometres above our heads may be illuminated by the Sun at any time of night. This allows them to appear as moving points of light against the stars as they take a few minutes to cross the sky. Some are steady in brightness while others pulsate or flash as they tumble or spin in orbit.

Dozens of satellites are naked-eye-visible every night, while many times this number may be glimpsed through binoculars. Predictions of when and where to look, including plots of their tracks against the stars, may be obtained online for free, or example from heavens-above.com, or via smartphone apps. Of particular interest are the so-called Iridium satellites which can outshine every other object in the sky, bar the Sun and Moon, during brief flares when their orientation to the Sun and the observer is just right. Although online predictions also include these, Iridium flares are falling rapidly in frequency since the satellites responsible are being deorbited as they are replaced by 2nd generation (and non-flaring) craft.

The most obvious steadily-shining satellite is, of course, the International Space Station which can outshine Sirius as it transits up to 40° high from west to east across Edinburgh’s southern sky. As it orbits the Earth every 93 minutes at a height near 405 km, it is visible before dawn until about the 15th and begins a series of evening passes a week later.

The Moon is new on the 6th and spectacular over the following days as its brightly earthlit crescent stands higher each evening in the west-south-west. Catch the Moon 12° below Mars on the 10th and 6° below and left of the planet on the 11th. Mars itself stands around 30° high in the west-south-west at nightfall and is well to the north of west when it sets before midnight. This month it dims from magnitude 1.2 to 1.4 as it speeds more than 20° north-eastwards from Aries into Taurus to end the period only 3° below-left of the Pleiades.

Mercury has been enjoying its best spell of evening visibility this year, but is now fading rapidly and may be lost from view by the 7th. Binoculars show it shining at magnitude 0.1 on the 1st as it stands 10° directly above the sunset position forty minutes after sunset.

The Moon and planets never stray far from the ecliptic, the line around the sky that traces the apparent path of the Sun during our Earth’s orbit. The ecliptic slants steeply across our south-west at nightfall towards the Sun’s most northerly point which it reaches to the north of Orion at our summer solstice in June.

Given a clear dark evening, this is the best time of year to spy a broad cone of light stretching along the ecliptic from the last of the fading twilight. Dubbed the zodiacal light, this glow comes from sunlight scattering from interplanetary dust particles and was the subject on which Brian May, the lead guitarist of Queen, gained his doctorate.

As the Moon continues around the sky, it reaches first quarter on the 14th and passes just north of the star Regulus in Leo on the night of the 18/19th. Regulus, 45° high on Edinburgh’s meridian at our map times, lies less than a Moon’s breadth above the ecliptic and marks the handle of the Sickle of Leo.

Algieba in the Sickle is a splendid binary whose contrasting orange and yellow component stars lie 4.7 arcseconds apart and may be separated telescopically as they orbit each other every 510 years or so. The larger of the pair has at least one companion which may be a planet much larger than Jupiter or, perhaps, a brown dwarf star.

Between full moon on the 21st and last quarter on the 28th, the Moon passes very close to the conspicuous planet Jupiter on the 27th. The giant planet rises in the south-east in the small hours and is unmistakable at magnitude -2.0 to -2.2 low in the south before dawn where it is creeping eastwards against the stars of southern Ophiuchus.

The red supergiant star Antares in Scorpius lies some 13° to the right of Jupiter while Saturn, fainter at magnitude 0.6, is twice this distance to Jupiter’s left and lower in the twilight. Look for Saturn to the Moon’s left on the 1st and just above the Moon on the 29th.

Venus is brilliant (magnitude -4.1) but becoming hard to spot very low down in our morning twilight. More than 10° to the left of Saturn as the month begins and rushing further away, it rises in the south-east 81 minutes before sunrise tomorrow and only 39 minutes before on the 31st.

This is a slightly revised version, with added diary, of Alan’s article published in The Scotsman on February 28th 2019, with thanks to the newspaper for permission to republish here.